As part of a service agreement, York International was required to provide the University of Pennsylvania power plant with a vibration analysis survey on its 210 ton chiller. SymphonyAI Industrial was chosen to perform this machine condition analysis by York. The chiller unit consisted of an AC motor, running at 3570 RPM, coupled to a speed increaser gear set with 41 pinion teeth turning the centrifugal compressor shaft at approximately 10,400 RPM. The compressor had 17 compressor vanes and was fitted with journal (sleeve) bearings.

Vibration data was taken at the free end of the motor and at the gearbox end of the compressor. The data was collected in all three axis- axial, radial (vertical) and tangential (horizontal), over two frequency ranges. A low, narrow band range from 0 to 600 Hz provides a good resolution of the first 10 harmonics of the motor shaft rate and the first three harmonics of the compressor shaft. The high, wide band range from 0 to 6000 Hz provides a good look at the compressor vane passing frequency and the gear mesh frequency. At the end of August, the unit was run under full load and vibration data collected. The data was then run through SymphonyAI Industrial’s ExpertALERT™ Expert Automated Diagnostic System (EADS) which contains rules and diagnosis relating to this type of motor-coupling-gearbox-compressor setup.

EADS reported a SERIOUS compressor journal bearing wear problem and cited several peaks of the compressor shaft harmonic series as the offenders (see report below). Along with determining the mechanical fault, the report also provided a recommendation to inspect compressor bearings for proper clearances and gave it a “Medium” priority grade.

The EADS priority grades are:

Journal bearing problems are difficult to diagnose. Unlike rolling-element contact bearings, there is no clear mechanism for generating specific vibration frequencies. As the sleeve bearing wears, the clearances increase. This increase in clearances often times causes a series of harmonics in the spectrum at the running speed. Manual analysis was also performed by an SymphonyAI Industrial analyst to back up the EADS automated diagnostics, and found to be in agreement with the EADS report (see low and high range graphs below).

On September 22, three weeks after the data was collected, this unit failed. The chiller was disassembled by York technicians, and all internal compressor components were inspected. Among the findings were high speed journal and thrust bearing wear and the gears were badly corroded and damaged beyond repair. The cause of the bearing wear was determined to come from the pre-rotation vanes found to be partially open, thus causing the compressor to start under load.

The ability of the software to diagnose mechanical faults and provide accurate recommendations is due in-part to accurate machine internal configuration information obtained from the manufacturer.
Information such as bearing types, number of compressor vanes, number of gear teeth and shaft ratio is very important in helping the EADS software to distinguish which peaks represent which component and to apply the rules and diagnosis accordingly. 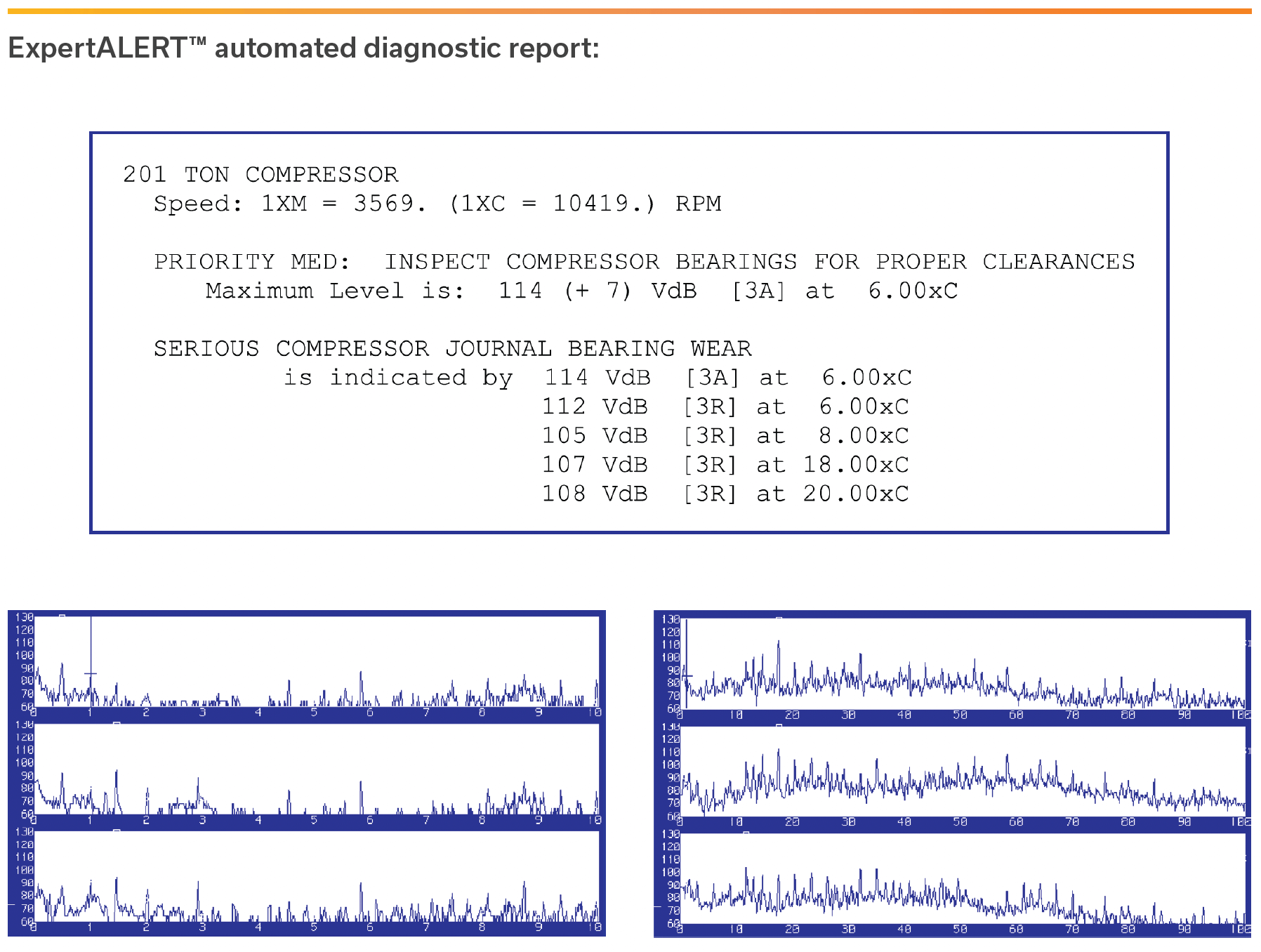